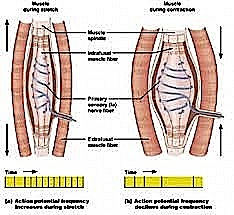 WHEN HOLDING POSES long enough, muscle or ligament tension [contraction] will release and increase the degree of flexibility.  This seems obvious, because it is something that we experience.  However, having a better understanding of what this process is can enhance our use of this process and validate holding poses vs. a more rapid flow.  Restorative and Yin Yoga both hold poses [as well as Soft Power Yoga—a more intensive practice model that is an outcome of Restorative-Yin practice: See an October 2011 Islands Of Grace blog on Soft Power Yoga].   In Soft Power Yoga, participants report rather rapid gains in flexibility in a few sessions that surpasses gains made in a couple of years of popular vinyasa-style flow.

When yoga becomes predominantly a sequence of holding poses rather than a more rapid “fitness” “flow,” ongoing flexibility and strength of the muscles may be rather rapidly increased.

UNDERSTANDING THE MUSCLE/CONNECTIVE TISSUE RELEASE PROCESS: When a muscle is stretched, sensory processes in the middle of the muscle trigger a good thing: The muscle first contracts to try to avoid being over-extended and injured.  Not understanding the muscle release process, the stretch is often pushed to rapidly counter the contraction.  A simplar process occurs in tendons/ligaments, directed by the Organ of Golgi.  Minimally, this makes yoga “work,” and detracts from the heart of yoga that aspires to deepen and open.

“Spindle release” and “lymphatic process” were key transition points for me in the practice of yoga.

In “holding yoga,” as the stretch is patiently sustained rather then quickly brought to an “edge,” muscles may respond as if they “feel safe,” and, when “safe,” contraction may be gradually released.  While muscle is incapable of “feeling safe,” the spindles in the muscle are instantaneously transmitting information into the CNS [Central Nervous System] that can be consciously sensed when more stilled and quiet.  With a sense the stretch being gradual rather than abrupt, spindles “release” and muscle expands.  And as the pose continues to be held, this expansion can continue rather than be aborted for a new pose.  As this practice is repeated, an increased transformation of base flexibility is likely to occur, and is likely to occur rather rapidly.

More than a sense of pushing to an “edge” to force change, a participant consciously listens to the body initially contracting in the area in which the pose tends to focus, and then begins to feel the muscle release [because the pose is deemed to supportive and safe], and then consciously follows the continuing release that I am referencing here as “expansion of the muscle.”

Rather than needing to get “heated” to get more flexible, simply holding and gradual relaxation into the pose may work to increase flexibility and strength rather rapidly.

This sense of patiently holding poses also contributes to overall relaxation so that the practice becomes quiet, still, and contemplative, wherein one “listens” to the body.  In a more non-Western esoteric sense, the flow of prana may be enhanced.

As with any increase in one’s base flexibility, practitioners are also rewarded with a the discovery of new nuances in the body as the body begins to “open” and respond differently.

So overall, in feeling the initial contraction and subsequent release, it is almost as if one can “read” the spindles in the muscles tensing then releasing the muscles.   And knowing that the spindles will tense to protect the tissue and then relax becomes a process that can be directly experienced and used as an effective metaphor in yoga.

For example, in the base Yin Yoga seal pose [ illustrated, or in my additional variations: adding knees bent up with legs crossed; with legs continuing to be crossed, hands brought in closer (lifting thighs off mat with only knees touching), one can feel the abs and lower back tensing at first to keep the back safe.  But by holding the pose, counting to 30, one can begin to feel a release muscular contraction, and the hips sink toward the mat.  One can consciously continue to allow the abs to release and lower lumbar region and frontal pelvis, bringing the front of the hips and the pubis toward the mat to deepen the flex of the lower back. 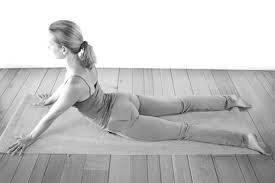 In all held poses, breathing can amplify the process of directing the release.  It is integral to Soft Power Yoga.  Often, inhaling lifts the area of focus, and exhaling then releases or expands the tissue.  Sometimes, inhalation releases and allows further expansion.   In non-Western tradition, exhalation  can reference the “exercise” of apana, the contraction and extraction of excess energy, as well as the stimulation of kundalini energy that can then move up a central energy channel that transforms body-mind work from being just flexibility and strength to become body-mind-spirit work.  Body-mind-spirit work aspires toward the heart of yoga [and all body-mind practices] to optimize health by expanding one’s identity beyond self.

Posted by Lance Kinseth at 4:26 PM 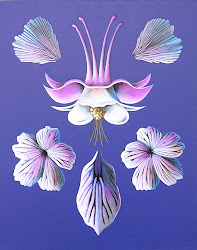